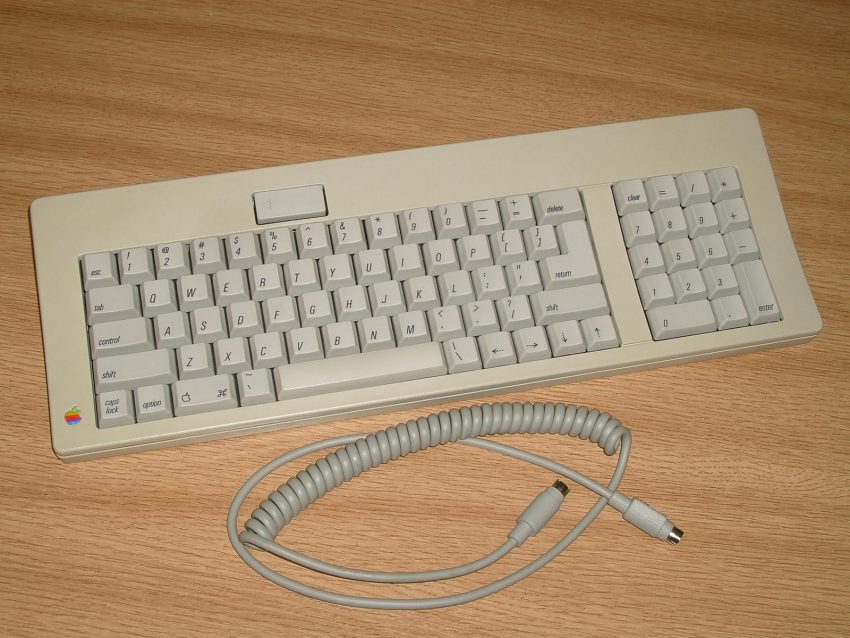 The History of the Mac Keyboard

For over four decades millions of people around the world have long enjoyed the experience of using Macs for their personal computing needs, but what is frequently overlooked is the history of the Mac Keyboard. Mac was much more well known for their computers than their keyboards, and yet some of these keyboards are still considered extremely collectible today.

Humble Beginnings with Apple I and Apple II

The history of the Mac began in 1976 with Apple’s first-ever PC, Apple I. Originally Apple I used a naked printed circuit board without a keyboard, but later in its development, Apple cooperated with resellers to fit cases with built-in keyboards to the Apple I.

Beginning in 1977, keyboards were built into the cases in the factory on the Apple II and Apple III series. These primitive keyboards had brown keycaps with white font. The Apple II had 52 keys and then the Apple III expanded to 74 keys.

The mid-1980s saw some back and forth in Apple’s keyboard design. The Macintosh, first released in 1984, separated the numerical keypad from the alphanumeric assembly—both connected to the PC via modular cables. Then, in 1986, the Macintosh Plus brought the numerical keypad back into the alphanumeric assembly and this design became the standard for all subsequent Mac keyboards. Macintosh Plus also completed the brown/beige color era of the keyboards.

The end of 1986 harkened a new aesthetic era from a color perspective as all Apple keyboards became platinum gray. The platinum gray color lasted until the middle of 1998. Equally notable is that during this period these keyboards connected through the Apple Desktop Bus (ADB).

During this same time, Apple IIe, IIc, and PowerBook maintained integrated keyboards. The PowerBook was notable for a slight aesthetic departure by having a dark gray “smoke” color rather than the standard platinum color.

Throughout most of the 1990s, Apple increasingly diversified its keyboard offerings. There were various styles of keyboards during this period, such as the extended keyboards, which were a competitive response to the features of the IBM PC Advanced Technology.

Switches in Apple and Mac Keyboards

The Cream Damped Alps was the most common switch in the Apple Extended Keyboard. Its slider had a cream color, and it was tactile and rather quiet. Small rubber inserts on either side of the slider dampened the sound by lessening the impact at the end of both the downstroke and the upstroke. These switches are sometimes mistakenly thought to have rubber dome switches because they are so quiet and have a high tactile point. Cream Damped Alps switches were brought back to life in the form of the Matias Quiet switch, which is similar. Cream Damped Alps switches were also known to be present in Apple Extended Keyboard II.

October 1998 marked another pivotal moment in the history of Mac keyboards with the release of the first iMac. This iMac came with a translucent, plastic keyboard modeled after laptop technology. The iMac also began the use of USB connections instead of ADB.

While the iMac keyboard was compact, it was replaced by the full-sized Pro Keyboard in July 2000. The Pro Keyboard featured slightly translucent black keys with a clear case. Around this time the PowerBook and iBook also had translucent keys in bronze, then black for the PowerBook, and white for the iBook.

In 2002 the iMac G4 featured a white keyboard as well as a Bluetooth wireless keyboard. On the wireless keyboard, Apple removed the adjustable feet from its back. Subsequently, this footless version was featured on the wired version as well. Also noteworthy during this time was the fact that the Aluminum PowerBooks featured an opaque aluminum color with backlit translucent legends—further diversifying the styles in use at the time.

The AppleDesign Keyboard, which also came in black with the black version of the Macintosh, was an unwelcomed replacement for the Apple Extended Keyboard II in 1994. It was a rubber dome keyboard which made it quite a bit lighter than its predecessors and it had a much softer and quieter keystroke that ultimately proved to be unpopular with many typists.

The Apple Adjustable Keyboard is flat and designed to be an ergonomic keyboard. The keyboard has two halves that hinge from the center back and extend away from each other in the horizontal direction. There is a large spacebar in the center, which is attached to the fixed base. The keyboard was sold with detachable wrist rests, one for each wrist, and a separate numeric keypad also with a wrist rest. The function keys and navigation keys are located on the numeric keypad.

The Apple Numeric Keypad IIe was Apple’s first external keypad. It was designed specifically for the Apple IIe computer in 1983 and it intended to improve some of the negative aspects of the II series’. Subsequently, the Platinum IIe incorporated the numeric keypad into its keyboard.

The Apple Standard Keyboard is still loved to this day by mechanical keyboard enthusiasts due in no small measure to the keyboard’s use of Orange Alps switches. This keyboard was first released with the Macintosh II and Macintosh SE, both of which did not come with a keyboard. Buyers had to choose between the Apple Standard Keyboard or the more expensive Apple Extended Keyboard.

The Apple Newton Keyboard has gone down in history as one of Apple’s most infamous failures. While Newton was an attempt to offer a more compact keyboard than ever before, its epic failure of adoption contained one silver lining—the birth of the iPhone.

The Modern Era of Mac Keyboards

Apple introduced their modern keyboards in the early 2000s and as the designs evolved they took on a substantially thinner design. This thinness allowed for less flexing of the wrist and a slightly lower hand position. During the evolution of the modern Mac keyboard, they began using an aluminum enclosure and the USB ports were located to the right and left ends of the keyboard case. The control key positions were changed and keys associated with specific functions were added such as the Dashboard key, volume up, down, and mute buttons which are located in the function row.

Some of the earliest versions of modern Mac keyboards were aluminum keyboards, which had chiclet keys and aluminum enclosures. These keyboards have an ABS bottom plate, a thin steel plate on top of the bottom case plate, the membrane switches with rubber domes on a non-elastic plastic sheet, and then the upper aluminum case contains the keycap holes. These keyboards used a scissor switch, which had lower hinges that latched onto the steel plate.

Magic Keyboards are a family of wireless Apple keyboards that are sold with the iMac and Mac Pro, as well as standalone products. The Magic Keyboard family replaced the Apple Wireless Keyboards. Each Magic Keyboard model has a compact or full-size key layout for specific geographies, a function key or Touch ID sensor next to F12, and is available in multiple colors. It’s important to note that Apple refers to the internal keyboards in MacBooks released after November 2019 as Magic Keyboards.

While Apple’s current Magic Keyboards have enjoyed tremendous popularity, many mechanical keyboard lovers are not happy with Apple’s move away from mechanical switches, and others truly miss the use of scissor switches. Because Apple no longer makes mechanical keyboards for Macs it has fallen to other keyboard manufacturers to fill this void. Additionally, it has led to the collectibility of vintage keyboards such as the Apple Standard Keyboard and the Apple Extended Keyboard II, where some collectors retrofit these vintage keyboards with modern USB-A or USB-C connections. Whether you are looking for a new hobby and are interested in collecting and repairing vintage Apple keyboards, or if you just want a new Mac keyboard that was made for your MacBook or iMac, there are more options than ever available for mechanical keyboards for Macs for those that prefer the click and clack while typing away.